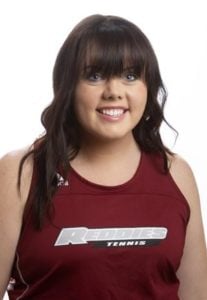 Corbie Adams received quite a return not long after she started the Master of Business Administration hybrid program at Henderson State University.

She landed a full-time position as an admissions counselor at HSU in September 2020, less than one month into the program.

Her mentor, MBA program director Dr. Lonnie Jackson, had told her about the merits of an HSU MBA and had suggested finding a graduate assistant position that would help her pay for her master’s degree through part-time work.

“I was doing that until the admissions counselor position opened,” she said. “As I am a full-time employee at the college, my tuition is also covered.”

Adams graduated with a Bachelor of Business Administration three months before enrolling in the MBA program. She played tennis for the Reddies for two years and completed a marketing internship in the HSU athletic department.

“When I came to Henderson State, I talked to Jennifer Sigman, the director of the Center for Student Excellence in the School of Business,” she said. “She took me under her wing and explained the different classes.

“I immediately fell in love with it because they gave me the one-on-one attention I needed. As a new student not knowing anyone here, I felt at home in the School of Business. It was nice.”

Adams was born and raised in southern California, where she earned an associate degree at Mt. San Jacinto College. She also played tennis for two years for the Eagles.

Although Adams has only taken ACC 6123: Accounting for Business and Management and FIN 6113: Managerial Finance in the MBA program, she looks forward to Dr. Jackson’s MGM 6183: Managerial Leadership and Ethics course.

“He is a great teacher,” she said. “The professors are great about getting back to me if I have a question. The School of Business is unique because it’s such a small college that you have that one-on-one attention from the professors.

Adams prepared for the MBA program in HSU’s MBA Bootcamp. The coursework in the hybrid program is all online, but each class also meets twice a month in person.

“With everything going on with COVID-19, our teachers don’t do in-person office hours as much,” she said. “It’s good to have those virtual office hours in the MBA program.”

Her experience as an online learner at Mt. San Jacinto College put her in a good spot for her MBA coursework.

“My senior year, I had two in-person classes and three online, so I am quite comfortable with the online atmosphere,” she said.

Nearly everybody in Adams’ family is an educator, but she wants to take a different career route. She gained valuable experience as president of the student government association at Mt. San Jacinto.

“When I left, I was hoping to go back and work there,” she said. “The president told me he would hire me. That experience made me want to do more on campus at Henderson State.

Adams expects the MBA will open up new opportunities once she graduates, and she is keeping her options open.

“I would like to pursue my doctorate, get into student services and work my way up in college administration.”

She hopes that once the pandemic ends, she can pick up where she left off with her passion for traveling. She visited all 50 U.S. states by the time she was 16 years old and has been to more than 20 countries.

“My dad was a police officer,” she said. “He took off two weeks to a month every year and we would travel. My parents are both happy and supportive of me getting an MBA — especially at Henderson State.”

On track to complete the program in 2022, Adams also hopes to be able to walk in a commencement ceremony at HSU after missing out on that experience as an undergrad. Either way, she knows that she will have a quality education to her name and real-world experience under her belt when that day arrives.

“It’s exciting that I will have an MBA and years of job experience when I graduate from Henderson State,” she said. “I was planning to get my MBA to land a job like this. Instead, I have been able to land this job while just starting my MBA. I am extremely blessed.”

Little Rock Native Mitchell Ford Takes Swing at MBA in Accounting Program
Talk about making the best of a difficult situation. When Henderson State University golfer Mitchell Ford was unable to compete for the Reddies during his…
Read more
What Business Pros Need to Know About Machine Learning
While machine learning may seem like a futuristic fantasy where computers teach themselves, in reality it is a here-and-now application that analyzes huge amounts of…
Read more
Must Know Trends in E-Commerce
Having upended the world marketplace nearly two decades ago, e-commerce continues to surge as businesses scramble to meet the overwhelming demand for web-based shopping. Today’s…
Read more
Why You Should Consider a Career in Aviation Management
The aviation industry has a fascinating and legendary past and will surely have a long and storied future. Many of the developments, old and new,…
Read more
5 Career Options for Graduates With an MBA in Aviation Management
The aviation industry accounts for 7.3 million jobs in North America, which amounts to 4.3% of all jobs and 4.2% of the GDP for the…
Read more
5 Ways Data Visualization Solves Business Problems
If a picture is worth a thousand words, data visualization is worth thousands of bits and bytes of information. For example, Visual Capitalist provides an…
Read more
5 Interesting Industries for Big Data Jobs
People associate data science with specific sectors like the tech industry. However, a Harvard Business Review (HBR) article notes that data science is “poised to…
Read more
Help Solve Real-World Business Problems With an MBA in Data Science
Data science is undoubtedly a technical field, but data science applications are concrete, tangible, transformative and rooted in strategically solving real-world business problems. This arena…
Read more
Why Data Scientists Need Both Soft and Hard Skills
There is no substitute for the hard skills required for careers in data science like coding, modeling, creating visualizations and managing frameworks. Still, employment and…
Read more
What Is Aviation and Airport Operations and Administration?
Professionals with a specialized Master of Business Administration (MBA) degree in aviation management can work in a wide variety of settings and capacities. As the…
Read more
Learn to Apply Ethical Reasoning in Leadership Roles With an MBA in Engineering Management
According to the study titled The Influence of Ethical Reasoning on Leader Effectiveness: An Empirical Study of NonProfit Executives, “Much theoretical and normative evidence supports…
Read more
What Is Engineering Management?
Effective engineering leaders do not simply manage engineering technology personnel. Engineering management is a set of leadership capabilities that combine technical mastery with an understanding…
Read more
Have a question or concern about this article? Please contact us.

Articles that appear on this website are for information purposes only. The nature of the information in all of the articles is intended to provide accurate and authoritative information in regard to the subject matter covered.

The information contained within this site has been sourced and presented with reasonable care. If there are errors, please contact us by completing the form below.

Timeliness: Note that most articles published on this website remain on the website indefinitely. Only those articles that have been published within the most recent months may be considered timely. We do not remove articles regardless of the date of publication, as many, but not all, of our earlier articles may still have important relevance to some of our visitors. Use appropriate caution in acting on the information of any article.

Submit the form below, and a representative will contact you to answer any questions.

By submitting this form, I am providing my digital signature agreeing that Henderson State University (HSU) may email me or contact me regarding educational services by telephone and/or text message utilizing automated technology or a pre-recorded message at the telephone number(s) provided above. I understand this consent is not a condition to attend HSU or to purchase any other goods or services.